Success In Efforts To End Childhood Hunger in VA 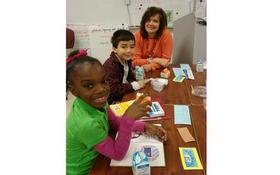 PHOTO: Outreach and efforts to increase access already are meaning more Virginia kids getting enough to eat, in school and out, according to First Lady Dorothy McAuliffe and the No Kid Hungry campaign. Photo courtesy of Drew Central Schools.

Originally posted by the Public News Service on December 11, 2014

RICHMOND, Va. – A new coalition including Virginia’s First Lady already is seeing results in an effort to reduce childhood hunger. Organizers with the group Share Our Strength say their No Kid Hungry campaign is getting unprecedented attention from First Lady Dorothy McAuliffe.

Josh Wachs, chief strategy officer with Share Our Strength, says that’s already feeding some of the one sixth of Virginia’s kids who sometimes don’t get enough to eat. Wachs says the McAuliffes understand it’s not a lack of food, but a lack of outreach and access.

According to No Kid Hungry more than 300,000 children in Virginia are what’s known as food insecure, something the First Lady’s office calls an “unacceptable number.” But they say more schools already are offering breakfast and summer meals.

Estimates are childhood hunger cost Virginia $3 billion a year in health-care costs and lost economic productivity. On the other hand, No Kid Hungry says children getting breakfast in school produces an average 17 percent better math scores. Lincoln Saunders, chief of staff to First Lady McAuliffe’s office, says a workforce capable of building the new Virginia economy starts with children who get enough to eat.

“A kid simply can’t be hungry to learn if they are just plain hungry,” he says. “A kid who is sitting in their classroom with a rumbling stomach isn’t going to get the most out of that day’s lessons, out of their interactions with their teacher.”

According to No Kid Hungry, the state provided 170,000 more summer meals this year than last, a 22 percent increase. Wachs says that happened simply through advocacy and better communication.

“Basic outreach and awareness efforts, texting numbers, marketing materials, by the First Lady reaching out to schools asking them to serve more summer meals,” he says.