Home » The Issues » Budget and Tax Reform » The Bush Tax Cuts After Ten Years: Bad for Virginia, Bad for America

The Bush Tax Cuts After Ten Years: Bad for Virginia, Bad for America 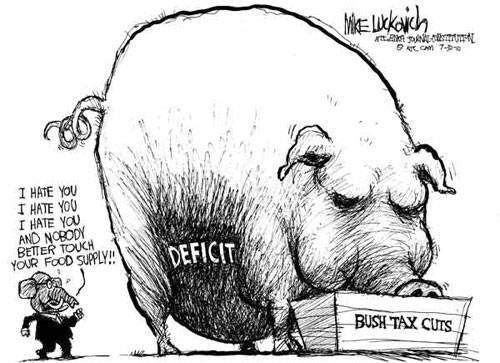 The Bush Tax Cuts After Ten Years: Bad for Virginia, Bad for America

Ten years ago, on June 7, 2001, President George W. Bush signed into law the first of several tax cuts that drove the balanced budget he inherited from President Clinton deep into the red. Last year, Congressional supporters of Bush’s policies pushed through an extension of these tax cuts through the end of 2012.

Fiscally irresponsible: Many lawmakers want to extend the Bush tax cuts again into 2013 and beyond, which would almost double the federal budget deficit.

Unfair: The table below shows that 45.0 percent of the benefits of this tax cut extension in Virginia would go to the richest five percent of the state’s taxpayers.

Hypocritical: Many of the same lawmakers insist that the budget deficit forces them to cut or eliminate public services like Medicare and Medicaid.

We are still suffering from the policies and economy left behind by President Bush. The Bush tax cuts are not good for America, and Congress should not repeat this mistake again.

The Bush Tax Cuts' Impact on U.S. Taxpayers
(figures for all U.S. taxpayers)