The People Versus ALEC 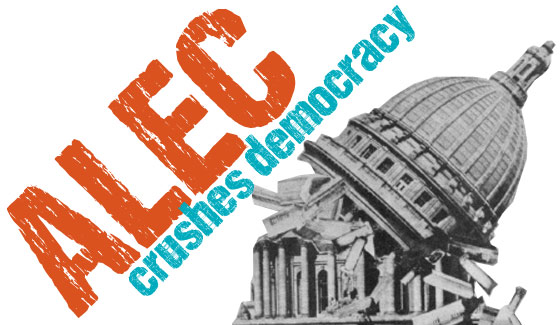 The corporate-funded American Legislative Exchange Council (ALEC) is getting desperate as a growing list of corporations flee the group over ALEC's push to make it more difficult for millions of Americans to vote and their encouragement of vigilante justice through "Stand Your Ground" laws. Now they're lashing out—at ProgressVA.

On April 12, Virginia Speaker Bill Howell, unable to defend his affiliation with this organization, went on the offense instead, accusing us of lying about ALEC's influence in Virginia. When Anna Scholl asked him to identify anything that was false in our ALEC report, the Speaker told her he'd speak in littler words so she could understand.

McDonalds, Wendy's, Coke, Pepsi, Kraft, Intuit, Mars International, and the Bill & Melinda Gates Foundation have all quit ALEC because promoting polices that are bad for American families turns out to also be bad for their bottom lines.

ProgressVA has brought to light ALEC's corporate influence in Virginia, the conservative legislation they’ve ghostwritten in the Commonwealth, and the money they've doled out and it's made them mad.