Home » The Issues » Immigration Reform » The Weight of History

The Weight of History 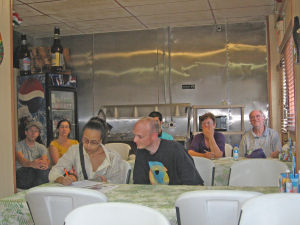 Published by the Culpeper Star Exponent on June 4, 2014

A grassroots group of local citizens gathered in the basement of a Latin American tienda Monday night in Culpeper in support of comprehensive immigration reform. Charlottesville-based Virginia Organizing coordinated the event during which the short documentary, "The Dream is Now," was shown, advocating for a path to citizenship for millions of undocumented youth brought to the U.S. by their parents.

"For me, it's the civil rights issue of our time," said Virginia Organizing volunteer Pat Smith, a retired teacher and artist from Locust Grove.  "I grew up in the '60s when I was involved in that civil rights movement, too and when I was a child in the '50s I worked through my church with migrant workers so it's been a life-long thing for me."

Five years ago, she lived in Prince William County during a time when that locality had implemented local enforcement of federal immigration measures.

"I had to carry around my own passport because the police would stop anybody whenever they wanted, you had to show documentation," Smith said. "That was terrifying."

She supports a pathway to citizenship for undocumented workers who are not criminals.

Jay-Bo Carpenter, of Orange County, attended Monday's event at El Rincon Hispano on East Street with about 20 other people because he wants to get the attention of his congressman, and help affect some kind of change.

"I've already been writing (Rep.) Eric Cantor (R-Richmond) trying to push for him to put this up for a vote," said 34-year-old Carpenter, who works with the family business at Baker's Store in Culpeper.

A pathway to citizenship wherein applicants would have to wait a decade to earn it, learn English and pay back taxes is what he said he would support. Carpenter said he knows immigrant families living in the U.S. for more than 20 years without the proper documentation.

"It's a human rights issue," he said. "I just feel we should all live and work here together instead of against each other."

Carmelita Carter, 30, of Orange County spoke in favor of citizenship for immigrant youth illegally brought to the U.S. by their parents.

"We certainly don't want to send back the children who have been here since they were 1-year-old or separate them from their parents or grandparents," said Carter, a student. "It's inappropriate. We all belong here. Years ago, people didn't want people who looked like me to be here," said the woman of color. "I t just doesn't make any sense that we are treating other people as though they are not as good as us because they look or speak a different way."

Culpeper resident Beth Boyd, a former English as a Second Language teacher for Culpeper County Public Schools, said it was a privilege for her to teach many of the young immigrant students who came through the program she started back in 1991.

"I'm just really concerned about the way Culpeper has treated its immigrant population and really want to do what I can to help change things," she said.

A Virginia Organizing leader who asked that her name not be printed in the newspaper said that one of the purposes of Monday night's gathering in Culpeper was to get Cantor to agree to a meeting about immigration reform.

Culpeper's congressman has come under increasing pressure in recent weeks about the hot-button topic with one side criticizing him for not bringing reform measures up for a vote on the house floor and the other side criticizing him for his continued reported support of policies that would grant legal status to undocumented immigrants serving in the military and proposed measures allowing citizenship for children brought into the country illegally.

Carter, the student, declined when asked if she any message for Cantor, her congressman, on the issue.

"I don't even know what you could tell Eric Cantor. I don't really think he cares," she said. "I think all that matters to him is he gets reelected and he doesn't have to do much in this area to get reelected. No one puts any pressure on him."

"Inevitably, something will be done, but people will claw tooth and nail to keep the status quo as long as they can," she said. "The cruelty is so horrendous that as people become aware of the real stories of what is happening to hardworking neighbors, more and more the weight of history is going to come down in favor of a pathway to citizenship."