Time to Get Out the Vote for November 8 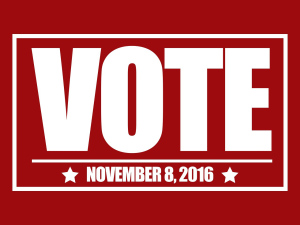 The voter registration deadline has passed and now it is time to think about voter turnout in Virginia for the November 8 Election Day.

The Presidential election is probably the most well-known item on the ballot, but Virginians will be voting for more than just a new President this year.

In addition to the President, we will also elect U.S. Representatives. While most current Representatives from Virginia are running for re-election, there are few competitive races. Congressmen Scott Rigell (2nd District) and Robert Hurt (5th District) both chose not to run for reelection and Congressman Randy Forbes (4th District) was defeated in his party’s primary.

Virginians will also vote on two constitutional amendments. The first is one that Virginia Organizing opposes, since it will limit the rights of workers and unions.

The second proposed amendment on the ballot reads, “Shall the Constitution of Virginia be amended to allow the General Assembly to provide an option to the localities to exempt from taxation the real property of the surviving spouse of any law-enforcement officer, firefighter, search and rescue personnel, or emergency medical services personnel who was killed in the line of duty, where the surviving spouse occupies the real property as his or her principal place of residence and has not remarried?”

For more information about these amendments, including the current law and explanation of these proposals, visit http://elections.virginia.gov/election-law/proposed-constitutional-amendment-2016/index.html.

In addition to the federal elections and amendments to the Virginia constitution, your locality may have other elections for mayor, city council, school board, local ballot initiatives, etc. To find out exactly what is on your ballot, visit https://vote.elections.virginia.gov/VoterInformation and enter your information. You can also see your polling place (which is also included on your voter registration card).

When you vote, don’t forget that you need a photo ID for in-person voting! Find acceptable forms of ID at http://elections.virginia.gov/casting-a-ballot/in-person-voting/index.html.