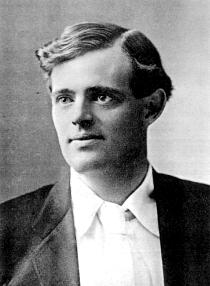 Novelist Jack London was born today. His classic definition of a scab — someone who would cross a picketline and take a striker's job: "After God had finished the rattlesnake, the toad, the vampire, He had some awful substance left with which He made a scab. A scab is a two-legged animal with a cork-screw soul, a water-logged brain, a combination backbone of jelly and glue. Where others have hearts, he carries a tumor of rotten principles" (1876).

Seattle Mayor Ole Hanson orders police to raid an open-air mass meeting of shipyard workers in an attempt to prevent a general strike. Workers were brutally beaten. The strike began the following month, with 60,000 workers walking out in solidarity with some 25,000 metal tradesmen (1919).

Pres. Roosevelt creates the National War Labor Board to mediate labor disputes during World War II. Despite the fact that 12 million of the nation’s workers were women — to rise to 18 million by war’s end — the panel consisted entirely of men (1942).