Published by Union of Concerned Scientists.

On August 15, Trump signed an executive order, repealing an Obama-era executive order that updated the Federal Flood Risk Management Standard for the first time in 37 years to require consideration of future flood risk when building or rebuilding with federal funds. With ample evidence that climate change puts federal (and other) infrastructure at risk, it is ultimately American taxpayers who will pay the price for building without regard to sea level rise and the impacts of increasing extreme weather.

What is the Federal Flood Risk Management Standard?

In 1977, the Floodplain Management executive order by President Carter required federal agencies to evaluate whether actions–such as building–would take place within or affect the local floodplain. This order was in place through two Democratic and three Republican administrations.

It is important to note that the FFRMS has no impact on private development. It does not affect insurance rates through the National Flood Insurance Program. And it does not affect local or state standards where those standards are higher than those outlined by the federal standard.

Building for the Future

Taking some time today to plan for future conditions is something we do in many facets of life today. We try to have college savings accounts for our children, for example, because we know the day will come when they are ready for college, and we know that we need to have those savings in place in order to pay for it. Saving for college requires envisioning a future that’s different from the present, one that seems far off when you’re changing diapers.

Envisioning how flood risks will change over time in response to climate change is more challenging–but with over 170 communities facing chronic inundation in just 18 years’ time, it’s no further off than your baby’s high school graduation.

We need to stop building for today and start building for the future that decades of scientific studies have been outlining. And a strong majority of Americans agree: A recent survey by the Pew Charitable Trusts found that 82% of registered voters support flood-ready infrastructure. Repealing a common sense measure that major infrastructure agencies such as USACE and DOT have been working thoughtfully to implement is irresponsible to current and future taxpayers and jeopardizes the safety and well-being of communities that depend on federally funded infrastructure. 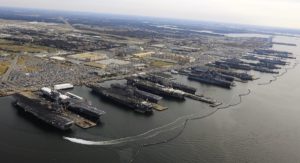 Sea level rise allowed high tides to expose electrical equipment on the underside of the piers at Naval Station Norfolk to sea water. Some of the piers are being raised at a cost of $60 million each. (Photo credit: Union of Concerned Scientists / Wikimedia Commons)

What not to do

Here in the Bay Area, we have a prime example of what not to do. Californians recently spent $6.4 billion on the new Bay Bridge, which connects San Francisco to Oakland. The bridge opened in September of 2013. Fourteen months later, the state’s Metropolitan Transportation Commission released a report funded, in part, by the US Department of Transportation finding that with 3 ft of sea level rise, the eastern approach to the bridge would be permanently inundated.

UCS’s most recent sea level rise analysis shows that with roughly 2 feet of sea level rise by 2060, parts of the approach would be chronically inundated–flooding, on average, every other week.

So my tax dollars went toward the construction of the bridge. And my childrens’ tax dollars, should they stay in California, will likely go toward altering it as sea level rise makes the eastern approach unreliable. The financial and political burden of making the Bay Bridge flood resilient could hang over Californians’ heads for decades to come.

California has since updated its guidance on incorporating sea level rise into planning decisions. Likewise, measures such as the FFRMS are a way of safeguarding our investments rather than investing in infrastructure that will fail and need to be rebuilt, again with taxpayer money.

On the other hand, as of 2015, nearly 600 communities–big cities and small towns alike–already had common sense measures in place that are ensuring that structures are built above the 100-year floodlevel. These “freeboard” requirements range from 1 to 3 feet above the 100-year flood level, and are common sense measures that are aimed to reduce future flood risk.

This executive order will not affect those local requirements, even if projects are receiving federal funding. It may be, as is the case with global warming emissions reductions, that cities and counties will lead the way when it comes to making infrastructure resilient.

At the federal level, major infrastructure-oriented agencies such as DOD, DOT, and USACE have conducted extensive  sea level rise assessments and developed sea level rise planning tools in recent years. And in response to the recently updated federal flood risk management standard, such agencies have been drafting new building guidelines to ensure that their assets are climate-resilient.

In short, the federal agencies responsible for the reliability and safety of America’s coastal and inland infrastructure know that climate change poses problems for our nation, and they have already begun to take steps to reduce their risk.

The FFRMS is just a drop in the bucket of what our nation needs to do to plan for sea level rise and increasingly extreme events.

The American Society of Civil Engineers has given America’s infrastructure a D+ and states that “it is not clear that [Trump’s executive order] will protect the environment and improve public safety.” Now more than ever, our nation needs coordination and leadership on climate change at the federal level. In the absence of that, cities and counties need to continue to evaluate and enforce their flood standards so that residents stay safe in the face of our changing climate.