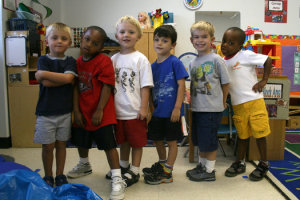 Two in five Virginians live in areas without sufficient childcare to meet local families’ needs, according to a new study. (Woodleywonderworks/Flickr)

The Center for American Progress report examined statistics from eight states to compare the number of children under age five to the number of childcare providers. Report author Rasheed Malik, a policy analyst with the Early Childhood Policy Team at the center, said fully two-thirds of the children in rural parts of the state live in what the study described as “childcare deserts.”

“About 2 million Virginians live in rural areas, and those communities have the highest likelihood of being childcare deserts,” Malik said. “So it’s in some ways, a rural problem.”

About 40 percent of Virginians overall live in childcare deserts, according to the study, which is close to the national average.

Malik said children of color – especially Hispanic children – are more likely to live in childcare deserts. And the consequences could be felt for decades to come.

“Think about our future: future workforce, our future innovators. These children deserve the best start that we can possibly give them,” Malik said. “And high-quality childcare and early education is one of the safest investments that we can make as a society.”

The study suggests that helping families pay for child care could drive the market. If more parents can afford to enroll their children, then more facilities will be built.