UVA Board To Meet June 26 Amidst Push To Reinstate Sullivan 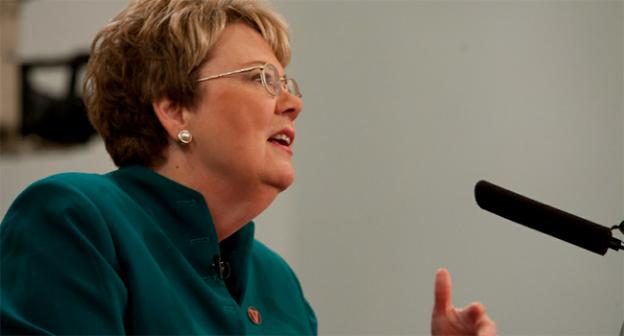 The University of Virginia Board of Visitors has scheduled a meeting for June 26 and and may vote to reinstate President Teresa Sullivan after nearly two weeks of turmoil on campus. Organizers could now swing into high gear to lobby for the change.

Meanwhile, Carl Zeithaml, the dean of the university's undergraduate business school who the board chose earlier this week to be UVA's interim president, has suspended his contract negotiations with the school's board until members meet next week.

Sullivan had said she would return if Rector Helen Dragas, head of the board of visitors and a mastermind of Sullivan's ouster, was replaced. For George Cohen, president of the faculty Senate, the news was thrilling.

"We are still seeking the reinstatement of President Sullivan, the resignation of Rector Dragas, and I think this really gives us a chance to re-examine the whole structure of the board of visitors, the method of selecting board members," said Cohen. "I think everything should be on the table now for examination and debate."

But Joe Szakos, an experienced community organizer from Charlottesville, says faculty members like Cohen might have to step up their game to confront powerful people and make sure the votes for Sullivan are there.

"You have a tremendous advantage, because there are UVA donors, UVA graduates, UVA students everywhere in the state, and so if the person you are trying to really put pressure on lives in Virginia Beach or Alexandria or Roanoke or wherever, you could find a lot of people there, and it could become very personal," he said. "There's no way this is going to change unless it becomes personal."

He'd even to talk with the governor's kids, who are students at UVA, and confront members of the board at their places of employment or worship.

Sources told the Washington Post that during the meeting in which the board of visitors voted to replace Sullivan, as many as eight board members wanted to keep her on the job, but there were 16 people on the board. Now, with the resignation of Vice Rector Mark Kington, who collaborated with Dragas, eight would be enough to reverse the board's decision, bring Sullivan back and make some important donors happy.

Dragas might not be inclined to quit, but her term on the board of visitors expires July 1, and Gov. Bob McDonnell (R-Va.) might sidestep this controversy at the state university by refusing to reappoint her.