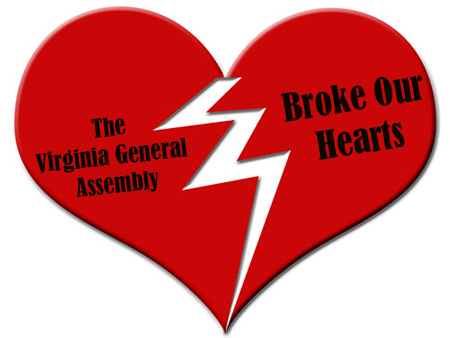 Our hearts have been repeatedly broken by the Virginia General Assembly this year.

We've been lied to:"We'll work on jobs and education, we swear!"

We've been cheated on:"I am just going out with my corporate lobbyist friends tonight, it's really nothing!"

We can't take another excuse:"These voter ID bills are just to fight 'voter fraud' and have nothing to do with the election."

Virginians voted for legislators who promised to put people back to work, get the economy moving, and make our state the best place for a child to receive an education. Instead of focusing on the issues that affect Virginia's working families, the Virginia General Assembly has focused on far-flung legislation like lifting the one gun per month limit, fetal personhood, drug testing welfare recipients and much more.

We are outraged that Virginia’s General Assembly refuses to stand up for the most vulnerable Virginians, and we’re appalled that the Assembly has been spent time pursuing a conservative social agenda, attacking voting rights and protecting tax loopholes for the wealthy. These policies don’t represent the kind of Virginia we believe in.

We believe in a Commonwealth that stands for fairness and justice.

On Tuesday, February 14 join us in Richmond as we tell our legislators that they've broken our hearts.

10:00am: Meet inside the General Assembly

11:30am: Line the walk from the General Assembly to the Capitol with broken hearts signs stating the legislature's misplaced priorities

If you’d like to attend, please register HERE. We’ll be in touch with more details, including carpool information, after we receive your registration.