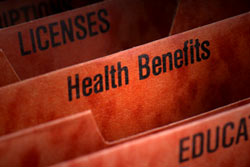 The Virginia Health Reform Initiative (VHRI) met on July 15.  The task force made a number of important decisions about how health care reform will work in Virginia.  They mostly talked about how the health benefits exchange will work.  The health benefits exchange is a way for small businesses to band together to buy health insurance.  They decided that there will be separate health benefits exchange pools for small business and for individuals.  They also decided that the rules inside and outside the exchange will not necessarily be the same.  However, they postponed a decision on whether the exchange would be an active purchaser or not (see below).  For more details see http://www.hhr.virginia.gov/Initiatives/HealthReform/ .

Among the reports given at the July 15 VHRI meeting was a study on the potential size of the exchange in Virginia.  The report found that there would be at least 120,000 individuals in the small business exchange.   The full report, along with other reports from the meeting will be at:

An interim version of the survey VMSA has been doing was released on July 14.  The report is available on the VMSA website at http://www.virginia-organizing.org/category/issues/small-business

The Virginia Main Street Alliance is no longer using the Virginia Organizing database for these emails.  While the VO system is much more efficient, we could not limit the emails VMSA members received.  So we are back to the old VMSA database. If you had unsubscribed to the VO list you may need to reply and ask to be deleted.   If you would like to receive VO emails please reply to this email and we will make sure you get them.

The Virginia Organizing grassroots gathering will be on August 13 in Richmond.  The day will have workshops on skills and issues.  Wendell Potter, former insurance industry public relations director and author of Deadly Spin will be the featured speaker.

The Commonwealth Institute has a good background piece on the Health Insurance Exchange.  http://thecommonwealthinstitute.org/Portals/16/Health/healthexchanges.jan.10.v3.lowres.pdf

As part of the transition to covering people with pre-existing conditions, the federal government has set up a Pre-existing Condition Insurance Plan in Virginia.  Anyone who has been uninsured for at least six months and has been turned down because of a pre-existing condition can purchase health insurance through this plan.  Monthly premiums run from $93 to $401.

Go to http://www.healthcare.gov/law/provisions/preexisting/index.html for more information.