“It was great to be with a group of Virginians committed to making our commonwealth a better place and to discuss issues that are important to all of us,” said Herring. “Virginians win when we raise our voices and work together for social justice. That’s what Virginia Organizing is all about.”

Virginia Organizing celebrated its 20th anniversary in 2015. The Grassroots Gathering is an annual event that incorporates community organizing skill development, working with public officials to accomplish common goals, and reflecting on the previous year.

“The annual Grassroots Gathering gives us a chance to celebrate with our Chapters and leaders all across Virginia,” said Virginia Organizing Board Chairperson Sandra A. Cook. “It’s exciting to see so many grassroots activists in one place, working together for the common good.”

Virginia Organizing held a celebration dinner on Saturday night after a group meeting to look back over 20 years of accomplishments.

To interview a spokesperson for Virginia Organizing, please contact Amanda Pohl at 804-337-1912 or amanda@virginia-organizing.org. For photos, click here. 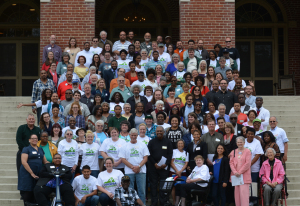