Home » Chapters » The Valley » About the Shenandoah Valley Chapters

About the Shenandoah Valley Chapters 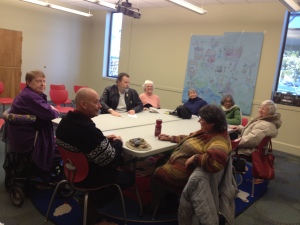 The Augusta/Staunton/Waynesboro Chapter has been active in promoting the Affordable Care Act and towards the Expansion of Medicaid and closing the coverage gap. The Chapter has organized vigils, rallies, and community forums to inform individuals about the ACA. Currently, the Chapter is working on a fair-hiring initiative called “Ban the Box.” The Chapter will ask the city of Staunton to remove the question on the job application about an individual’s conviction history and delay the background check inquiry until later in the hiring process. The Augusta/Staunton/Waynesboro Chapter meets every third Wednesday of the month at 6pm at the Fishersville Library.

Check out the Shenandoah Valley Facebook page to keep up to date with the latest information!