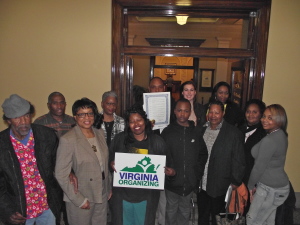 Originally posted by the Danville Register and Bee on Tuesday, January 20, 2015.

Danville resident Johnny Mayo always liked to talk politics. He said he would often head over to friend Charlie Jones’ house to watch sports, and the two would talk about the latest political events and trends.

Jones invited Mayo to come to a local meeting of Virginia Organizing a few years ago, and Mayo said he liked what he heard. He is now a state board member for the organization, and has helped the group engage with political leaders on both a state and local level.

“We bring the people together who usually don’t have a voice or are scared to voice their opinion about the issues that affect their lives,” Mayo said. “We galvanize them together and discuss the issues.”

On Tuesday, the Danville City Council presented the group with a city proclamation, recognizing 20 years of community activism. Mayo was there, along with about a dozen other local members, to accept the award and speak with council members.

Mayo said the group is involved with many local and state issues and devoted to empowering residents whose voices are not usually heard. In Danville, Mayo said the group has been active in eliminating criminal history questions from city job applications and talking with local law enforcement about discrimination and profiling issues.

“The police chief just did a forum,” Mayo said. “He had some positive things to say.”

Danville resident Catherine Fitzgerald got involved with the organization about four years ago, when William & Mary students were helping to organize voter registration in the city. She saw a chance to help advocate for herself and her community members.

“For me, it’s because I’m a senior, on fixed income, and with medical problems,” she said. “I’m fortunate enough to have Medicare, but a lot of people don’t and they can’t receive the treatment that they need.”

Mayo said one of the best parts of the organization was helping local residents tell their personal stories to elected officials.

“It helps them understand that these issues affect peoples’ lives,” he said.

Nik Belanger, Southside organizer for Virginia Organizing, said the issues advocated by the group are usually progressive, but the group works with lawmakers from both sides of the aisle.

“The issues that matter to the people we work with are not strictly Democratic or strictly Republican,” he said.

For example, Belanger said the group worked with Republican lawmakers to help push for pay day lending regulations statewide. The group has also talked with state Sen. Bill Stanley, R-Moneta, about a bill for short-term unemployment compensation. The bill was signed into law by the governor last year.

The group holds monthly meetings in Danville, and the next meeting is on Jan. 27 at Mount Vernon United Methodist Church.