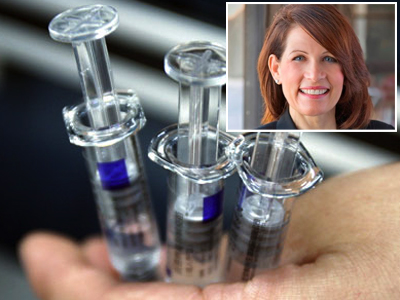 There was a surprising confrontation that emerged between two Presidential candidates this week as a result of their televised debate.  Texas Governor Rick Perry was criticized sharply by his fellow Republican, Minnesota Congresswoman Michelle Bachmann, for the executive order he made in Texas, which required young girls in Texas to be vaccinated against the Human Papilloma Virus (HPV).  It is important to note that his executive order included an opt-out provision for parents who refused the vaccine on religious grounds, and also that the Texas legislature over-ruled his executive order 3 months after Governor Perry signed it, stopping the program only 3 months after it started.

I see this as a teachable moment.  The objections that both Congresswoman Bachmann and the Texas legislature have to public policy requiring this particular vaccine seem to relate to the nature of the disease it protects us from.  HPV is spread through sexual contact, although it is not a disease that is reportable to the Centers for Disease Control (CDC) as a “sexually transmitted disease” such as gonorrhea or HIV.   HPV causes cervical cancer, with 11,000 American women diagnosed annually and 4,000 deaths each year.  The CDC estimates that 20 million Americans are currently infected with HPV, and most are in their late teens and early 20s.  The vast majority of persons infected clear the virus with their immune system, and without any noticeable disease.  Therefore, there is a high risk of exposure, with a lower risk of disease. However, the consequences of that disease can be fatal.

Objections partly come from a desire to avoid promoting sexual promiscuity among young girls, although there is no objective scientific research to suggest that 12 year old girls feel liberated to become promiscuous once they are protected from HPV.   In fact, since the FDA approved the two commercially available HPV vaccines, rates of teen sex in the United States have declined (I make no claim to causality – I would prefer a rigorous research trial to study the sexual habits of teens recently vaccinated, but there are none).

The other objection to Governor Perry’s executive order comes from fears of side effects.  Congresswoman Bachmann stated in a television interview the day after the most recent debate, "There's a woman who came up crying to me tonight after the debate. She said her daughter was given that vaccine. She told me her daughter suffered mental retardation as a result of that vaccine. There are very dangerous consequences.”   This statement does not hold up to a reality check.

The history of fear surrounding vaccines can be traced almost to a single source.   Dr. Andrew Wakefield of the United Kingdom published a study in 1998 linking autism to the measles-mumps-rubella vaccine, and this sparked a movement of anti-vaccine advocates that now seems impossible to reassure.  Dr. Wakefield has since been utterly disgraced – losing his license to practice medicine as it was revealed that he falsified the data included in his study, and the myriad conflict of interests he had that stood to profit from, if the scientific community believed his lies.  Since the false link between autism and vaccines was suggested, there have been massive worldwide efforts to study the side effects from vaccines.  The Vaccine Adverse Event Reporting System collects these adverse events, and is open and publicly searchable.   Vaccines rarely cause more than a local reaction, with redness and soreness at the injection site – a small price to pay to be protected from potentially deadly infectious diseases.

I was very pleased to see that in the wake of the thorough debunking of Dr. Wakefield’s fabrication, the scientific community is becoming forceful again in combating the fear-mongering of anti-vaccine advocates.  The American Academy of Pediatrics led the charge to refute the allegation that the HPV vaccination caused “mental retardation” in a child – there is no such data of any intellectual disability from any vaccine, let alone the HPV vaccine.  As physicians, we need to be forceful in educating our patients regarding the risks and benefits of vaccinations, but that counseling needs to be firmly rooted in science, not fear or religious ideology.

From a public health perspective, Governor Perry’s program of required vaccination with an opt-out for parents is the right policy for every vaccine in children.  Currently, the United States is experiencing somewhat of a course correction. After declining rates of vaccination, with national celebrities such as Jenny McCarthy scaring parents about the link between autism and vaccines, vaccination rates are rising again in the US.  It only took a few outbreaks of preventable diseases in communities with low vaccination rates to convince the public that vaccines are safe, effective, and sensible alternatives to acquiring preventable diseases.  Let’s not allow public figures that have unscientific reasons to object to vaccines reverse this positive trend.

HPV is something that can be eradicated with a broad vaccination program.  Cervical cancer can be prevented by a simple vaccine.  A sane public policy all politicians should advocate is a national requirement for all available vaccines, with an opt-out for religious reasons, thereby reducing Americans burden of disease and our collective health care costs.