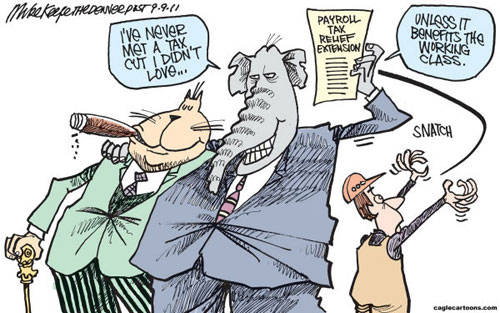 Once again the House of Representatives, led by the radical conservative bloc is holding up a needed tax break for most working Americans. After crafting a compromise budget bill in the Senate—which was passed on Saturday—House Republicans had a change of heart over the weekend and are now threatening to oppose the Senate bill this evening.

This position confirms their hypocrisy since they refuse to raise taxes on any other class but the middle class. Failing to continue the Social Security payroll reduction (effectively adding $1,500 in taxes to those struggling the most.) Remember, this is the same gang that insisted that not continuing the “Bush” tax cut would be “raising taxes.” Or is it simply that raising taxes is only a bad thing when upper income people are effected?

There is of course only one logical conclusion to be drawn from this action by the House. It has little to do with tax or the 1.8 million unemployed Americans who will lose their federal unemployment benefits in January if the House does not pass the Senate legislation, or legislation similar to the Senate’s,

I find it hard to believe that the cynical hypocrites are holding majority of the American people hostage to conform to their narrow political interests.  Few are surprised by their conservatives disdain toward the middle class and poor in this country. We know that the members of Congress opposing unemployment benefits extension and the payroll tax cuts are simply helping out the corporations and Wall Street bankers they serve. Why should they pay their fair share if Congress can figure out a way to dump the tax burden back on us? Those that pay the piper, call the tune.  As long as wealthy and corporate interests predominate in our election process, we can expect the same result.

At another level of course there are the “religious” right, some of whom are in congress who for some reason ignore their “Christian” beliefs for political gain.  Isn’t it Christian, especially at this season of the year, to be concerned from those among us that have so little?  Does their hatred of our President blind them to the real concerns of so many in this country?

The House Republican Grinches like Rep. Boehner and Rep. Cantor are holding the nation’s millions of unemployed Americans hostage and effectively raising taxes on the middle class. They are gambling with the security of people who are only seeking to keep a roof over their heads and put food on their families’ dinner table.