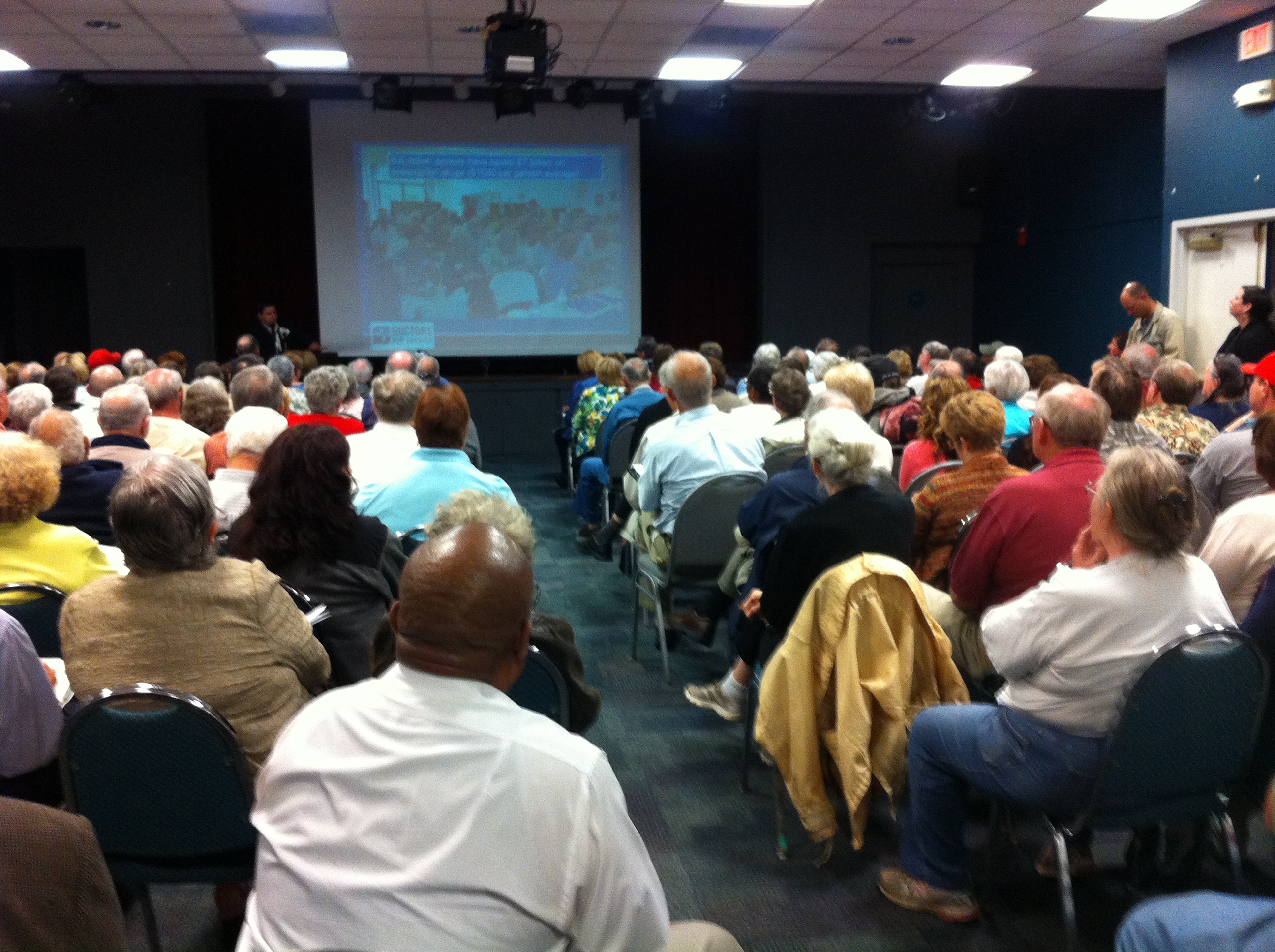 New health insurance marketplaces will be open for business in just one week.

On Oct. 1, the new federal marketplace goes live online as a virtual “supermarket” for shopping for health insurance policies.

You’ll be able to compare policies under different companies in an apples-to-apples manner, said Dr. Chris Lillis, a Fredericksburg internist who spoke to a standing-room only crowd at a forum Monday evening on the Affordable Care Act.

“For the first time, policies will be standardized,” Lillis said at the informational meeting held at the Central Rappahannock Regional Library in Fredericksburg. “You won’t have to read the fine print to see what’s covered and what’s not.”

But while health insurance plans must cover certain things—such as preventive care, prescriptions, hospital stays, mental health care and blood tests—picking a level of care for an individual leaves many with questions.

The marketplace isn’t for everyone, explained Lillis and Bill Botts, the new health care navigator for the city and 16 counties. He is tasked with explaining the law and how people should get insurance under it.

Botts, a longtime attorney with Rappahannock Legal Services, and a team of volunteers, will open a Fredericksburg office on Oct. 1 as well, and is taking appointments. He encourages everyone to research options at healthcare.gov, and not to rush a decision.

The federal exchange is for people who don’t have insurance and can’t get it through work, can’t afford private insurance plans and don’t qualify for Medicare or Medicaid. Virginia chose not to have a state-run exchange.

You don’t need the exchange if you’re eligible for Medicare or Medicaid; if you get insurance through your employer; if you’re paying for a private insurance plan; or if you’re in Tricare or veterans health programs.

One in 7 Americans have no insurance right now, said Lillis, also a columnist with The Free Lance–Star. The Affordable Care Act is expected to put a “good dent” in the 40 million to 45 million uninsured, though it won’t help everyone at the start, he said.

The lowest income bracket will still be covered by Medicaid; an expansion of the program is under debate by legislators. Lillis said a large gap will remain, leaving millions of low-income adults with no affordable options in the meantime.

For those who make 100 percent to 400 percent of the federal poverty level, coverage can be purchased through the exchange and, depending upon income levels, they will receive a subsidy from the government. That tax credit, which will be based on current income levels and will be paid directly to the insurance companies, can drastically reduce a person’s premiums. For example, a family of four that makes $50,000 could choose a plan that costs $924 per month. Tax credits would reduce the cost to $280 per month.

Any changes would be reconciled in the next year’s tax filings.

But Lillis and Botts said they couldn’t go through every example at the forum—that’s what the health care navigator is for.

During the question-and-answer part of the two-hour forum, Lillis said that every individual’s circumstance will be different from the next, and even though the exchange goes live next week, it’s open for months.

Coverage begins on Jan. 1, 2014, and there’s a 15-day waiting period after a premium is paid before a policy starts. If you purchase by Dec. 15, your coverage will go into effect at the new year.

But that’s not the final deadline. The exchange will be open for six months this year, meaning March 21 is the last day to sign up until open enrollment begins again, in October 2014.