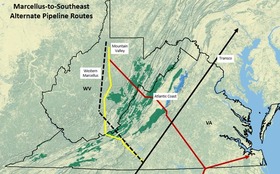 Va. – Growth of natural-gas drilling and new pipelines have observers concerned about their impact on public lands.

Ernie Reed, president of Wild Virginia, said he thinks people don’t always realize all that these public lands do. He said 22 Virginia communities – a quarter of a million people – get drinking water from the George Washington National Forest – and that doesn’t include millions of people downstream.

“The quality of the water that comes off of the public lands is impeccable,” he said, “and what that does is puts in jeopardy the source of the highest-quality drinking water in the East.”

Reed said the geology of Virginia’s national forests makes fracking unlikely, but it’s a greater possibility in West Virginia. Beth Little, administrator for the West Virginia Highlands Conservancy, said her group is concerned that, once the industry has drilled in other parts of the state, it might have little choice but to turn to national forests.

“Production drops quickly from a well,” she said, “and they need to keep drilling to produce more gas to pay their debt service, so they keep on this treadmill.”

Current Dominion pipeline operations have just been cited by West Virginia environmental officials for leaks and construction erosion and sediment.

Reed said thousands of acres of nearly roadless land around Shenandoah Mountain make up one of the largest pieces of connected, wild habitat in the eastern United States. When a pipeline fragments forest habitat, he said, it becomes harder for some species to survive.

“You are dividing what was a fairly intact ecosystem into two smaller islands,” he said. “That severely restricts their ability to maintain.”