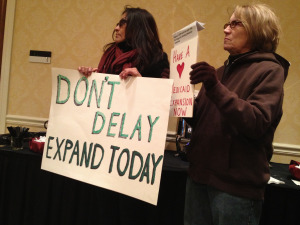 Originally posted by the Times-Dispatch

If Medicaid expansion began in Virginia on July 1, Virginia would take in more than $230 million in federal offsets that would alleviate 71 percent of the state’s $322 million budget gap, according to Bill Hazel, the state secretary of Health and Human Resources.

“The governor is fairly committed to ensuring these individuals that are uncovered get access to care one way or the other,” Hazel said Wednesday at AP Day at the Capital, a gathering of newsmakers and reporters from around the state, held at the Richmond Times-Dispatch.

“The logical way to do that right now is through Medicaid expansion,” Hazel said.

Del. John M. O’Bannon III, R-Henrico, said the legislature is “not likely to replay the big fight about Medicaid expansion” in the session that begins Jan. 14.

O’Bannon, a physician, said he believes there is a policy benefit in waiting on health care expansion. Virginia would get to see how other states that are taking the federal money have fared and it would get a better sense of whether the federal funding is sustainable.

He said Virginia is making progress on an array of health issues. For instance, he saluted Gov. Terry McAuliffe’s task force on prescription drugs and heroin.

“The rate of deaths from prescription drugs has doubled in the last 10 years,” he said. “We are now close to having more people in America die from drug poisonings than auto accidents, and that is a scary, compelling thing.”

Panel members said the U.S. Supreme Court soon will make a pivotal ruling on the Affordable Care Act. Under the law as written, federal health care subsidies are meant only for individuals in state-run marketplaces.

Some backers of the law say that was a drafting error. The question is whether the court will adhere to that literal interpretation.

In Virginia, which does not run its own exchange, more than 216,000 residents signed up for coverage last year and more than 70 percent received federal subsidies.

Jill Hanken, senior attorney at the Virginia Poverty Law Center, said 27 states have adopted Medicaid expansion, nine of them with Republican governors. “Aren’t we hurting the people in the commonwealth of Virginia by being so stubborn on this issue?”

Chris Bailey, executive vice president of the Virginia Hospital & Healthcare Association, said “the difficulty in getting a Virginia solution on coverage is presenting very significant financial challenges for the hospitals and health systems throughout the commonwealth.”