Home » The Issues » Immigration Reform » Goodlatte says illegal immigrants aren’t all the same, and should get varied treatment

Goodlatte says illegal immigrants aren’t all the same, and should get varied treatment 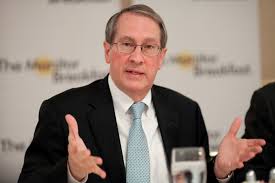 The most difficult issue in immigration reform may well be the status of people here illegally, and the key to solving it is recognizing that they’re not all the same, says the Republican point man on the issue.

Rep. Bob Goodlatte, R-Roanoke County, said the House Judiciary Committee he leads will tackle the issue of legal status as part of a series of bills that already have started working their way through the House of Representatives.

“We need to understand that someone who came here as a child with their parents is different from someone who overstayed a visa and has been working to try to correct that,” he said Tuesday during a swing through his district.

“Someone who has lived here since their parents brought them is different than someone who arrived last month.”

The Judiciary Committee will be the main channel for immigration legislation in the House, and he’s already joined the House leadership in saying he doesn’t plan to act on the Senate’s recently passed comprehensive immigration reform bill.

For House Republicans, the biggest stumbling block in the Senate bill is the pathway to citizenship for people who are now in the country illegally.

But Goodlatte thinks people who built a life in the U.S. after being brought here as children should have a way to gain the right to stay here.

He said the 1986 reform that also opened a pathway to citizenship for illegal immigrants created one major immigration problem that the Senate bill doesn’t fix: the complex system for seasonal agricultural workers.

Many farm workers who had stayed illegally won legal status and moved on to nonseasonal jobs. The farm labor system set up in 1986, meanwhile, is a cumbersome one that isn’t helping guest workers find legal work on farms or farmers find enough legal workers, he said.

Goodlatte said his other major concerns with the Senate bill include its lack of focus on people who have overstayed their visas, who account for about 35 percent to 40 percent of the estimated 11 million illegal immigrants now in the country. He’s also unhappy that it doesn’t address deportation of legal immigrants if they are convicted of crimes.

Goodlatte was in town to talk about his efforts to overturn or modify federal policies mandating increased use of ethanol in gasoline.

He said corn prices have soared, dragging a wide range of other food prices higher.

“Federal policy puts fuel above food,” Goodlatte said during a quick stop at Chris Pietrzyk’s Firehouse Subs restaurant in south Roanoke. Pietrzyk told him that the cost of his bread and mayonnaise alone is up by $6,500 in the fast few years because of soaring corn prices. The price rise is leading farmers to switch from growing wheat and soybeans to corn. Rising prices for corn, a major livestock feed, are driving up meat prices, too.