Home » The Issues » Climate/Environment » Gov. McAuliffe is on target with clean energy goals

Gov. McAuliffe is on target with clean energy goals 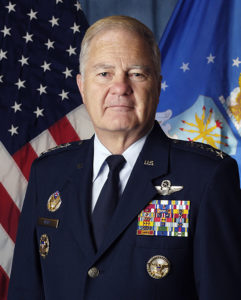 Published by the Virginian-Pilot.

During my time as commander of Air Combat Command headquartered at Langley Air Force Base, I often reflected on my earlier years as a young squadron commander flying F-15 Eagles there in the mid-’80s.

The Chesapeake Bay is the first thing you see when you fly out of Langley Air Force Base on the way to our over-ocean ranges. The shoreline opens up in front of you as you pass the Plum Tree Island and Grandview nature reserves. The water is usually green. It’s beautiful. But by the 2000s we were starting to realize the rising water was a growing threat.

Already, in September 2003, Hurricane Isabel had struck Hampton Roads. Langley was overrun by water — the bay was pulled up in the storm surge, and then washed over our military facilities. Water poured in to critical structures, ruining electronics, weapons systems and environmental infrastructure.

Imagine water damage to your home and your yard, but spread over 3,000 acres and dozens of buildings. The cost to taxpayers: $166 million.

After Isabel struck, Langley took preparations to defend the base when the water rose again. We moved critical electrical systems and generators into elevated positions. Flood- vulnerable buildings were reinforced with water-resistant doors. A pumping station was installed to suck out any water that overwhelms the base perimeter.

But all of these measures are not enough to protect Langley over the coming decades. Even now, mild storms can cause concern. Any defensive measures — a sea wall, more pumping capacity, building reinforcements — may not be enough against the overwhelming force of water from the bay.

Sea level rise is a growing threat to not just Langley, but the entire Hampton Roads area and communities. Daily tidal nuisance flooding is already becoming a problem. Routine Nor’easters can now cause serious issues. Saltwater intrusion and increased erosion effects are appearing.

As the commander of Air Combat Command, I was responsible for 1,200 aircraft, 27 wings, 17 bases, and more than 200 operating locations worldwide. I know that few solutions are perfect. I certainly know that one size does not fit all, but also, in this case, that local and state efforts are the building blocks that will move us to affordable, doable solutions where we live and how we live.

For these reasons, I think Gov. Terry McAuliffe’s recent announcement on clean energy is on target. We need to keep the conversation engaged, set the table for a clean energy economy here in Virginia through smart policies, be willing to partner with surrounding states, and prepare our infrastructure to be resilient.

The military is already taking the effects of climate change into account when we address battle space awareness and force preparedness. Every day, military analysts assess the risk of drought, the threat of fire, the impact of high temperatures, the challenge of drastic flood plain changes, impacts of sea level rise, as well as the demand for increased humanitarian responses on our ability to base, train, test, mobilize, operate and reach-back to execute our primary missions.

The military stands shoulder to shoulder with many of the communities that we live and enjoy life in as well as work base-side in order to coordinate solutions. We will make the hard choices in ensuring mission effectiveness and resilience, but we cannot solve the underlying problem of sea level rise. That takes committed pragmatic and practical civilian leadership, and Gov. McAuliffe is showing it.