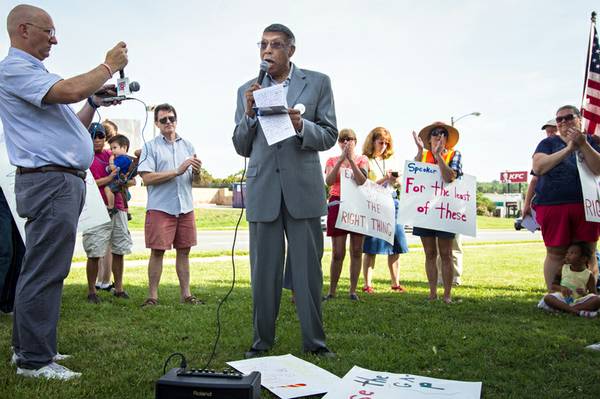 BY PAMELA GOULD / THE FREE LANCE-STAR

Former Fredericksburg Mayor Lawrence Davies carried a poster-board sign as he joined about 80 people Sunday morning in a silent march across the Falmouth Bridge in support of Medicaid expansion for adults.

The former pastor of Shiloh (Old Site) Baptist Church came out at the request of Virginia Organizing, a group that describes itself as “a nonpartisan statewide grassroots” organization but that local chapter member Ray Scher of Caroline County called “progressives.”

Davies, one of the event’s speakers, cited Leviticus 19:9–10 as support for his view that expansion of Medicaid for adults is not a political issue but a moral one supported by God.

Those verses call on people to leave behind some of their harvest when their crops come in each season so “the poor and the stranger” can gather the remainder.

He said the Medicaid expansion for 400,000 low-income adults “is not a handout, it is a hand up.”

Davies, in a two-piece suit and dress shirt, then joined in what Scher called a funeral procession as people walked from the parking lot in front of the Hard Times Cafe on U.S. 1 in Fredericksburg, north across the bridge to the law office of House Speaker Bill Howell, located at the corner of Gordon and Carter streets in the Falmouth section of Stafford County.

The group left at Howell’s front office door a small, black wooden coffin with a message in white that read: “1,000 in Virginia dead per year.”

That is the number of people the group claims would die annually without access to health care through the expansion, which is part of the Obama administration’s signature health care initiative known as the Affordable Care Act.

Howell, a Republican, is at the center of the issue in Virginia because of his leadership role as the legislature is at odds with Gov. Terry McAuliffe, a Democrat.

Howell was out of town with his wife Sunday morning and learned of the visitors to his office from someone who texted him after seeing the activity.

He said that “everyone is entitled to his opinion” on the issue and that many people disagree on it, but he feels a broader look is required to address it.

He said that Virginia Organizing has brought him petitions before and he welcomes such action.

“I understand where they’re coming from,” he said, but added, “I think you’re going to make the system worse, not better, by simply adding 400,000 people.”

Howell said the next step to resolve the issue is to hold a special legislative session and he has promised to do that.

“I think it’s irresponsible to think about adding 400,000 people when we haven’t fixed the underlying system,” he said.

Virginia is one of 24 states not participating in the Medicaid expansion for adults as of April 1, according to the most recent report compiled by the Centers for Medicare and Medicaid Services.

Fredericksburg resident Eunice Haigler, a member of the local chapter of Virginia Organizing, said she would benefit from the expansion and shared her story at Sunday’s event.

Haigler, 63, said she initially earned too much to qualify for Medicaid and now is part of a program that requires her to have $2,000 in medical bills each quarter before she receives help.

Acceptance into the Medicaid expansion program would enable her to get other medicines she needs and to quit relying on emergency rooms for her primary care, she said.

Haigler marched after sharing that she has suffered from a pituitary tumor, a stroke and cataracts and is now blind in one eye, partially blind in the other and is on disability.

Lillis, a primary care doctor who also volunteers at the Moss Free Clinic, said Fredericksburg and Stafford law enforcement were given advance notice of the group’s Sunday plans.

He said the use of a coffin was dramatic but said nothing else had worked.