Home » The Issues » Civic Engagement » Is the Virginia General Assembly Trying to Repeal the 20th Century?

Is the Virginia General Assembly Trying to Repeal the 20th Century? 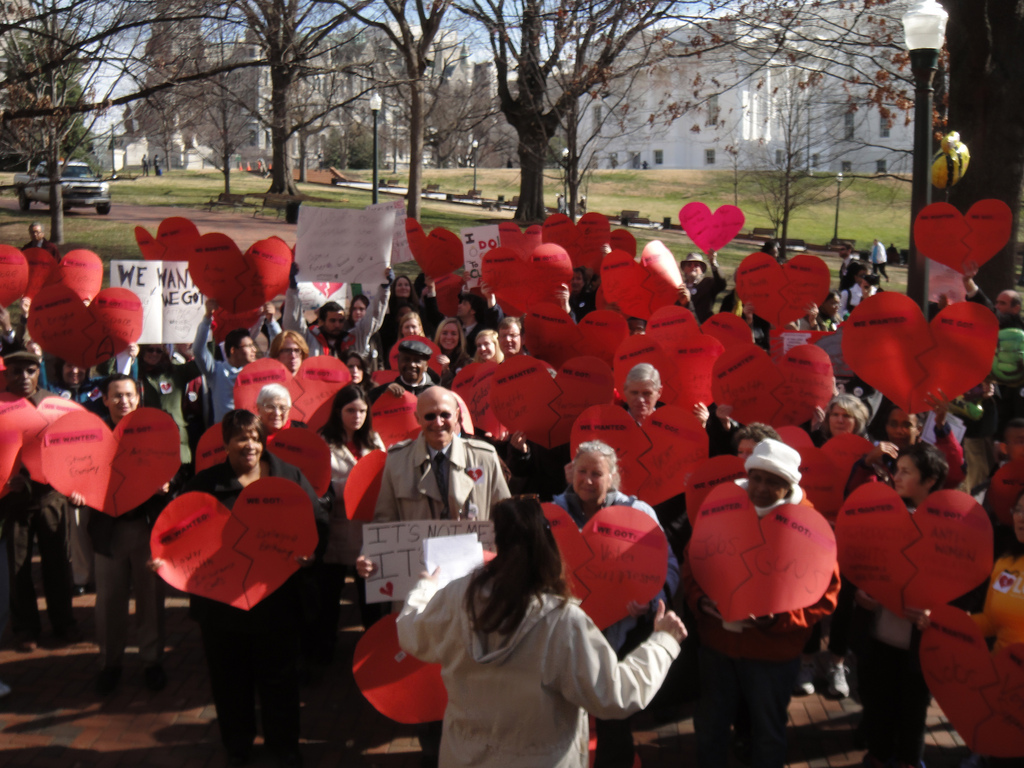 The 2012 Virginia General Assembly seems intent on taking Virginia backwards. Yesterday, Senator Dick Saslaw of Fairfax summed it up perfectly: “It seems to me there are people here who would like to repeal the whole 20th century.”

We’ve been speaking out against the General Assembly’s giant steps backwards.

On Valentine’s Day, 100 Virginia Organizing supporters from Abingdon to Arlington made their way to the Capitol to express their disappointment with the General Assembly’s misplaced priorities.

Virginians voted for legislators who promised to work on jobs and the economy and instead have focused on far-flung legislation like restricting voting rights, lifting the one gun per month limit, restricting gay adoptions and drug testing public assistance recipients.

Steps away from where the Senate was debating the controversial personhood bill, Virginia Organizing supporters held dozens of heart-shaped s

We chanted at the top of our lungs: “Turn Around, Better Run, The General Assembly’s Packin’ Guns!”

We sang the Supremes’ classic “Stop in the Name of Love.” And then we marched back into the building to distribute empty heart-shaped boxes of candy to all 140 legislators. Inside each box was a note saying, “Disappointed? So are we! We want a General Assembly that works for All Virginians.”  We hope the legislators got the message!

We had a lot of fun yesterday at the Capitol and found some creative ways to get our message across. But we know that much of the legislation being rammed through the Virginia General Assembly is no laughing matter.  It’s tough to pick our least favorite piece of legislation so far, but the voter ID bills stand out as a particularly egregious overreach that threatens our democracy. Two voter ID bills have sailed through the House of Delegates and Senate. After some tweaking of the bills it is almost certain that a bad voter suppression bill will await the Governor’s signature and we need to remind him that Virginia is for Voters (and Lovers), not voter suppression.

Tell him NOT to sign Senate Bill 1 & House Bill 9

As long as the Virginia General Assembly has its priorities out-of-whack, we will continue to remind them that they work for everyone. We appreciate all the work Virginia Organizing supporters do to keep Virginia moving forward.