Martinsville to Governor McDonnell: Don’t throw away our votes or our money! 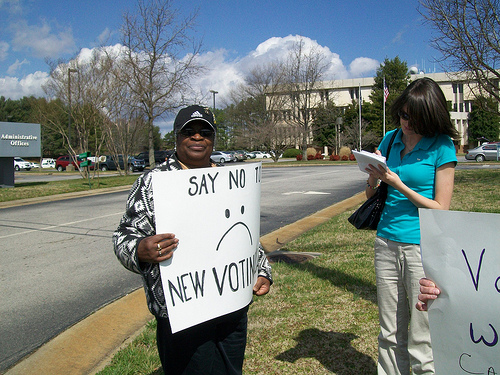 According to a new report from The Commonwealth Institute, the voter suppression laws could cost the state at least $1.2 million. Virginia Organizing is calling on the Governor to instead focus on funding education. The Henry County School System is bracing for a $2.8 million shortfall. In theory, simply vetoing unnecessary voter ID laws could make up one third of Henry County’s education budget shortfall.

Senate Bill 1 requires that Virginians show extra and unnecessary forms of identification at the polls. Seniors, low-income Virginians, young people, and immigrant voters are the least likely to meet the new excessive ID requirements. Voters without the right ID will not be able to sign a sworn statement under the penalty of the law, and will instead have to fill out a provisional ballot that only has a 50% chance of being counted.

House Bill 63 limits the transparency of how provisional votes are counted.  Both bills will suppress voters and cost the state money.

According to The Commonwealth Institute: "The Institute’s analysis examined voter ID laws in Maryland, North Carolina, Minnesota, Wisconsin, Nevada, Georgia and South Carolina, and put the cost for Virginia between $522,263 and $1,258,959."

"In a year of budget tightening and program cuts in other areas, the costs to the state represent significant tradeoffs. The cost of implementing these voter ID requirements is the rough equivalent of providing health care to between 396 and 954 Virginia children or providing support for an additional 109 to 262 Virginia children to attend high-quality pre-school."