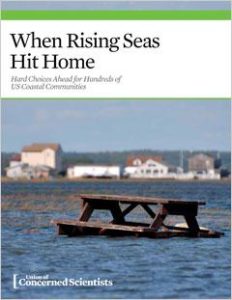 On Maryland’s Eastern Shore, rising seawater levels and chronic flooding threaten to disrupt daily life, damage homes and businesses, and swallow land in the relatively near future, according to a new study. For some parts of the Eastern Shore, there soon may be no more there there.

That’s the takeaway from a report released Wednesday by the Union of Concerned Scientists. The study, “When Rising Seas Hit Home: Hard Choices Ahead for Hundreds of U.S. Coastal Communities,” looks at the impact rising sea levels caused by global warming will have on coastal regions across the country.

Maryland, with 3,100 miles of tidal shore along the Atlantic Ocean and Chesapeake Bay, will be particularly hard hit, according to the study. Only Louisiana has more locations that will be affected as severely.

The study identifies 167 communities in 13 states that by 2035 will face chronic inundation — which it defines as when high tides flood 10 percent or more of the community’s usable, non-wetland area at least 26 times per year. Twenty-two of those communities are in Maryland, most on the Eastern Shore, which is coping with sinking land and rising sea levels. The study also points to three Virginia communities facing chronic inundation by 2035.

In some places, the predictions are ominous. The town of Crisfield, Md., on the lower Eastern Shore, will face chronic flooding of more than half its land area within roughly 20 years, the study said.

The new report is not news to many who live on the Eastern Shore. For years now, various studies have delivered the same prognosis. What is different in this report is the estimates of how soon this could happen. In 20 years, the landscape will be noticeably different. In 80 years, dramatically so.

“This report is putting a timeline on it,” said Brian Ambrette, a coastal resilience manager with the Eastern Shore Land Conservancy in Easton. “To put a fine point on it, people are buying homes in these areas with 30-year mortgages, and this is going to affect them in the time frame of their mortgages.”

The sea-rise crisis may be slow moving, but it is relentless and has caused communities to plan to address it, Ambrette said. That means mapping areas that are susceptible to flooding and directing new development to areas that aren’t as vulnerable.

The findings of the study are in line with what Maryland officials have been predicting, said Catherine McCall, the director of coastal planning in the state’s Department of Natural Resources.

“Sea-level rise is what the state has been preparing for. We understand what that risk is, and we’ve done a lot to prepare our communities for that,” McCall said.

The state, which has a commission on climate change, has funded dozens of projects over the past five years through its CoastSmart program, which works on tasks such as mapping flood plains and building up natural buffers to help communities limit the damage and impact of the encroaching ocean.

“If they have an immediate flooding need, we’re working with them on strategies to address that need,” McCall said. “And then there are other communities that may be thinking something 50 years from now, and they have different options available to them right now.”

Projects have also been implemented in counties that aren’t on the Chesapeake or its tributaries, as they, too, have been affected by climate change. In addition to directing state and local dollars to address the rising sea level, Maryland has gotten help from the Environmental Protection Agency and the National Oceanic and Atmospheric Administration for technical and financial assistance to local communities.

“These federal, state and local partnerships have allowed us to capi­tal­ize on the science and information that is out there, and has been very effective in making Maryland more resilient,” McCall said.

Virginia is also facing short-range issues brought about by rising sea levels. The study identified three communities facing chronic inundation by 2035. And 21 more will be affected by 2100, including Norfolk, Virginia Beach and Hampton.

“Many of these communities are home to people who have limited resources to move or adapt,” the study’s authors wrote.

Virginia’s rising sea level received national attention last month when President Trump called the mayor of tiny Tangier Island,which is in the Chesapeake Bay and is shrinking by 15 square feet each year.

Eskridge said he agreed with the president that the sea-level rise was nothing to be concerned about.

While multiple scientific studies have reached the same conclusions about sea-level rise and its impact, there is a hesitancy in some communities to address the issue, because the findings can impact everything from business development to real estate values.

“We’re in this transitional period where you still have a lot of people who don’t want to accept what’s coming down the road,” said Kate Patton, executive director of the Lower Shore Land Trust, a nonprofit that works to preserve rural land and communities on the lower Eastern Shore. Patton says strong political leadership is needed to address the inevitable rising water and determine the best ways to respond. “We saw what happened with [Hurricane] Sandy, so it’s important that we have strong leadership on this.”