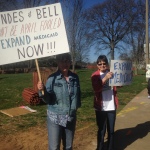 Originally posted in the Daily Progress on April 14, 2015.

The federal government, through fees from medical equipment and not taxes, has the money for each state to expand Medicaid — 100 percent for three years and 90 percent subsequently. Four hundred thousand residents would be covered at no expense to Virginia’s budget.

Del. Bell won’t vote yes to receive this money because he says that Virginia cannot sustain the expanded costs of Medicaid. However, I witnessed reports given to Virginia legislators that said the opposite. These reports came at committee sessions of the Medicaid Innovation and Reform Commission, led by Del. Steve Landes.

Also, many reports given to the committee by health-care systems all over the state said that these systems have reduced costs per Medicaid recipient and continue to do so.

I know it is incredible to believe that legislators would turn away billions of dollars without a legitimate reason, but it is happening here in Virginia.