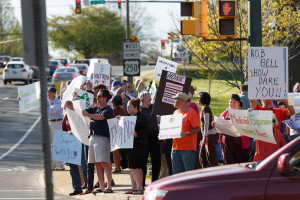 Virginia Organizing was featured as one of five non-profits in Cville Weekly on May 6, 2015 to honor our 20th anniversary.

On a bulletin board in Virginia Organizing’s headquarters in Charlottesville’s Rose Hill neighborhood is a sticker that’s been there as long as anybody can remember. It reads, “The most radical thing we can do is introduce people to one another.”

It’s a fitting motto for the nonprofit, which has been pushing for progressive change in communities around the Commonwealth for 20 years. Charlottesville is home for the organization, which claims about 1,000 members, largely because founder and executive director Joe Szakos and his family live here. A left-leaning city might seem like a natural headquarters for a group with a statement of beliefs that includes the establishment of a living wage, protection of workers’ rights and the elimination of the death penalty. But the organization is firmly nonpartisan, and much of its work takes place in corners of Virginia not known as blue strongholds.

“Our idea is to go places where other people aren’t,” said longtime development director Michele Mattioli. The first target community back in 1995 was in Lee County, she said, and what happened there is a model for chapter starts ever since. In hundreds of conversations with individuals about what they wanted to see change in their government and their lives, the group found an issue it could push on: A tradition of all-white juries, apparently a result of white jury commissioners tapping only people they knew to be “upstanding citizens” to serve, she said. The newly organized members went to each of the county’s five commissioners and had a conversation about changing their selection process to a random one. It worked.

“They didn’t need to make a big fight,” Mattioli said. “Sometimes people just need it brought to their attention that what they’re doing might not be the fairest thing.”

Now there are nine chapters across Virginia that work in the same way, all connected to the nerve center in Charlottesville: They learn from people without much voice what they want, help them figure out which people and institutions can make it happen and get everybody to work asking.

Dell Erwin, a volunteer leader with the Charlottesville-Albemarle chapter for years who has helped with efforts to institute a living wage and restore the rights of felons, said the organization inspires commitment from people because it offers routes to real change.

“I found the things I care about in one place here,” she said, “and they not only talk about it and study it, but they actually do something. Protests, rallies, marching, writing letters, going to visit our legislators. We really put feet to our words.” Or wheels, in her case; she’s nearly 80 years old, she said, and the last time she attended one of the organization’s annual all-chapter meetings, a neighbor pushed her there in a chair.

This spring, the group was able to mark a major victory in a campaign Erwin and many others have poured years of effort into. Known as “Ban the Box,” it aims to convince localities to stop including a spot on job applications for individuals to check off if they have a felony record. Organizers around the state got 15 local governments on board, and then last month, the Charlottesville office got a call from Governor Terry McAuliffe. He was signing an executive order for state agencies to “Ban the Box,” too, and wanted some members of Virginia Organizing to join him for the announcement. The next day, Charlottesville staff joined a van load of volunteers and drove to Richmond.

One Danville volunteer proved that the 20-year-old sticker that bears the group’s unofficial motto about introductions still holds true. When the woman met McAuliffe, Mattioli said, she asked him point blank if he’d send a letter to the Virginia’s top private employers asking them to follow the state’s lead on “Ban the Box.” He agreed.

Sandra A. Cook, chair of Virginia Organizing’s board for the last five years, said longevity for a nonprofit like theirs requires them to foster that kind of willingness to step up to the plate, to ask for what’s needed and not back down.

“After you’ve been around for a while, you realize what works and what doesn’t,” she said. “We don’t just come in and then move on. We stay.”