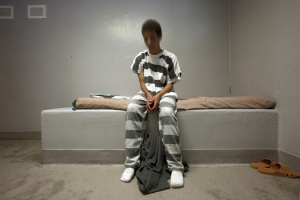 As Virginia considers what to do with juvenile prisons, a new study argues they should be emptied and closed. (Richard Ross/Annie E. Casey Foundation)

RICHMOND, Va. — As Virginia considers how to reform juvenile justice, a new national report calls for taking all young offenders out of prisons.

“The Future of Youth Justice: A Community-Based Alternative to the Youth Prison Model” is the report from the Annie E. Casey Foundation, Harvard Kennedy School and the National Institute of Justice. Looking at cost, recidivism and the impact on young people, the report argued that large juvenile prisons should be closed. Casey Foundation president and CEO Patrick McCarthy called them “factories of failure.”

“These institutions fail at protecting the community,” McCarthy said; “they fail at turning young lives around, they are unconscionably expensive, they are prone to abuse, they defy reform, and the bottom line is we have alternatives.”

The report also noted systematic, documented mistreatment in youth prisons since 1990 in most states, including Virginia. With fewer and fewer young people behind bars, Virginia has been considering how to house those who remain.

According to a 2015 report from The Commonwealth Institute, Virginia incarcerated youth at a rate 75 percent higher than the rest of the nation, costing the state nearly $150,000 per child. That same study found that nearly three-quarters of those released were convicted of another crime within three years.

McCarthy said juveniles are usually jailed for low-risk offenses, but even though the prisons are expensive, most young offenders don’t get the guidance and support they need.

“We’ve got to reinvest that money in things that work,” he said. “We don’t have any magic solutions for juvenile crime but we have many programs that have evidence of success that we need to invest our dollars in.”

Gov. Terry McAuliffe has said he wants to replace the state’s juvenile prisons with a number of small facilities. So far budget shortfalls have limited his success. But McCarthy said he favors that approach.

“Much smaller, more homelike, much more oriented to the appropriate developmental needs of young people,” McCarthy said, “a heavy focus on education, on job training and in preparing them to be successful.”