SPOTSYLVANIA BOARD ROOM ART TO BE EXPANDED 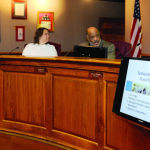 Originally posted by the Free Lance-Star on February 11, 2015.

They also decided to enlarge an image of John J. Wright, who is currently depicted in miniature on the existing mural.

Painting and installation of two 43-by-47-inch panels flanking the existing piece are currently priced at $3,000 and would be paid by taxpayers. Artist Judi Wigglesworth offered to complete the project for $2,500. The cost of framing the panels is projected at $500.

Wigglesworth was absent for the meeting. Dorothy Meyers, co-owner of Bosch Enterprises and Frame Designs, spoke to the commission on her behalf. Planning Director Wanda Parrish facilitated discussion.

The six mural subjects were recommended and selected based on their connection or contributions to the county. As part of the criteria, persons nominated for selection had to be deceased and have an identifiable, preferably tangible relationship to the county.

The Rev. Joseph Despot, a Spotsylvania native, was pastor of Piney Branch Baptist Church and president of the Sunday School Union. He also constructed barn structures, most notably the Sheraton Hotel.

Commission members determined that Despot will be depicted with the Sheraton, even though Livingston representative Tina Lance said there had been comment from the board on how the structure is now located in the city of Fredericksburg.

Salem representative Roger Braxton said that would not matter, as it was located in Spotsylvania when Despot built the 20th-century barn.

The 23rd U.S. Colored Troops Regiment, based in Spotsylvania, was the first black-only Union regiment to engage in combat against Confederate troops during the Civil War. Their inclusion replaced the Buffalo Soldiers in an initial rendition of Buffalo Soldier and Sgt. Benjamin Brown by Wigglesworth, who had included them in the background.

Brown, who was born in Spotsylvania, received the Medal of Honor for his actions during the intermittent conflicts known as the American Indian Wars.

Maude Scott was noted for her campaign to move and the One Room Schoolhouse to the county’s Courthouse area and her years of civil service on the School Board selection committee. She was also awarded the Governor Spotswood Award in 2008 for her contributions.

Sadie Coates Combs Johnson was the first teacher and a librarian at the Spotsylvania Training School, another name for the site.

The original mural was completed in 1989 by Sidney King of Caroline County, but has sparked criticism about lacking diversity in the decades since.