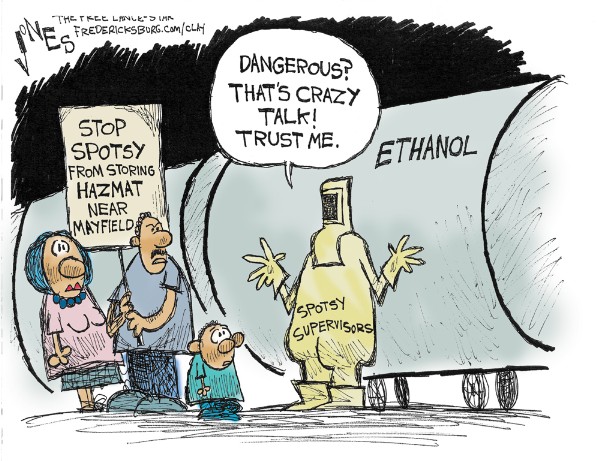 For my  national readers:  Mayfield is a neighborhood in Fredericksburg that’s  right next to the Spotsylvania County line.  Transflo, a company which stores and transfers hazardous material, parks rail cars there full of ethanol and some other nasty stuff.  They’ve violated a permit once and now residents of Mayfield are complaining to Spotsylvania County, that Transflo is storing more than they’re allowed.  The county’s response is pretty much “shut up”.  Of course the Board of Supervisors doesn’t care about Mayfield.  They’re not their voters.  But you don’t see the county supervisors putting hazardous waste into their own neighborhoods.

There’s not a rough to this cartoon because, you’re looking at it.  I liked the rough so much that I just went back over it with bigger pens (the roughs are always drawn with a ball point), re-did all the lettering, inserted some white out, a little cut and paste, inserted more shading and it was done.  I didn’t think redoing the cartoon would  have improved it.