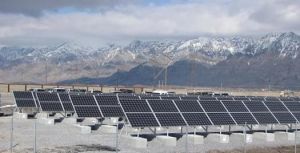 Critics of the Clean Power Plan charge it will sharply raise the cost of electricity.

But research by Georgia Institute of Technology and Synapse Energy Economics finds it could actually cut utility bills by using conservation and renewable energy.

“We see a reduction of, depending on the state, anywhere from five to 10 percent rather than an increase,” she relates.

The EPA is expected to announce exact details of the plan in the next month or two.

The plan to reduce carbon emissions from existing power plants is part of the agency’s strategy to help address global climate change.

And according to Elizabeth Stanton, a principal economist with Synapse Energy Economics, an environmental consulting firm, that would mean savings.

“Virginia households taking advantage of energy efficiency programs under the proposed Clean Power Plan would save on average 22 dollars a month, and their bills would then be 128 dollars a month,” she states.

The big coal and oil corporations, and their allies in Congress, are waging an all out fight against the Clean Power Plan. Still, several opinion polls find popular support for EPA plans to cut carbon emissions.