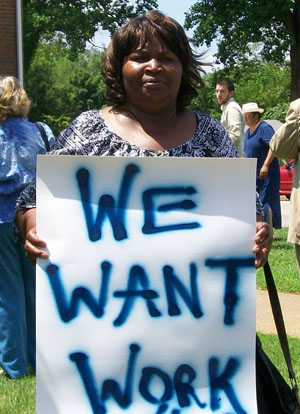 Pastor Loretta Murray of the Danville Chapter is no stranger to speaking her mind. Through her work with her church, the Greater Living Word Ministry, she knows many members of her community and has spoken out on a variety of issues facing Danville. Pastor Murray was already a tireless leader in her community when she first met Nik Belanger, Virginia Organizing’s Danville Organizer. Yet, she feels that her involvement with Virginia Organizing has inspired her to work harder for her community, city and state and has also renewed her faith in organizing people around shared values.

Pastor Murray has been involved with the Danville Chapter’s activities in support of Community Jobs legislation and helping the unemployed. This month Pastor Murray attended a Center for Community Change jobs strategy session in Washington, D.C., where she shared some of the Danville Chapter’s successes with activists from around the country.“With Virginia Organizing, I see that we have a voice at the City Council that we did not have before and that they are taking notice. We have been in the newspaper and we have protested for jobs and reached out to our elected officials. Our name is being recognized because we are bringing the community together to speak out on the need for job creation, unemployment benefits and an end to drastic budget cuts,” said Pastor Murray.

Pastor Murray recently chaired the Danville Chapter's legislative meeting with Delegate Danny Marshall and hosted a planning meeting at her church. “Working with Virginia Organizing has inspired me so much. Today we started a project in our church focused on bringing the community together that was in part, inspired by Virginia Organizing. I’m even more motivated now to go into my neighborhood and share the message and that if we pull together, we get strength from each other. And then we win.”