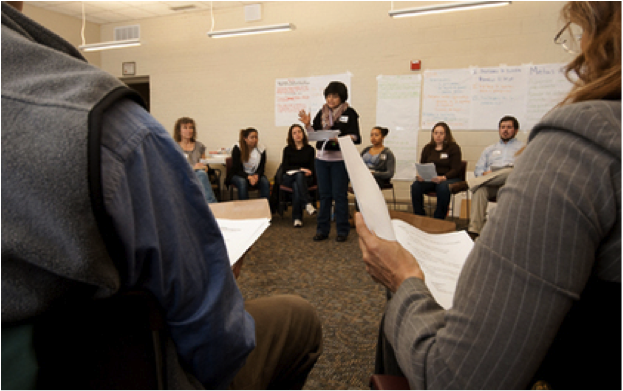 Nelly Moreno-Shenk gives instructions Saturday to volunteers training for the Rockingham County 287g Listening Project. Organizers say they want to find out from members of the Hispanic community what their experiences have been with the program that allows local officers to enforce some aspects of federal immigration law. (Photos by Michael Reilly / DN-R)

Wilfredo Flores speaks Saturday during a training session at the Lucy F. Simms Continuing Education Center. The Virginia Organizing Project and Wayside Center are asking volunteers to interview area Hispanics in regard to U.S. Immigration and Customs Enforcement’s 287g program.

HARRISONBURG— When it comes to gathering testimony from local Hispanics for the Rockingham County 287g Listening Project, area volunteers are all ears.

During a training session Saturday at the Lucy F. Simms Continuing Education Center, volunteers were taught how to gather opinions from the Latino community about Section 287g of the Immigration and Nationality Act.

The law, known simply as 287g, allows local and state police to receive training from Immigration and Customs Enforcement to carry out certain aspects of federal immigration law. Six law enforcement departments in Virginia, including the Rockingham and Shenandoah county sheriff’s offices, are involved.

Officers who receive training can detain illegal immigrants who have been arrested for other crimes. The goal of the project, according to federal immigration officials, is to identify and report dangerous aliens to ICE for possible deportation.

Opponents of 287g, however, contend that it can lead to racial profiling, has poor federal oversight and can cause immigrants to fear contacting law enforcement when in trouble.

Volunteers were taught what information to gather from interviewees and how to make them feel at ease about telling their stories or sharing concerns about 287g. Interview questions include asking if they have ever called the police for help in an emergency and why or why not; if they know anyone who has been deported; or if the risk of being deported has influenced their desire to call police.

Now through June, the approximately 20 volunteers who came for the training will knock on doors in the hopes of gathering eight interviews each. Follow-up meetings with the interviewers will take place in the coming months.

“I like to see the Hispanic community get more involved in what’s going on and [create] more dialogue between the community and the police,” said Nelly Moreno-Shenk, 47, a Harrisonburg resident involved in the project.

Information handed out to volunteers Saturday indicated the collected opinions might be used in the future for a documentary, report or media purposes.

“We want to listen to everyone’s story,” said Paloma Saucedo, 31, of Harrisonburg, another project volunteer. “I think a lot of people don’t know [287g] exists.”

The Rockingham County Sheriff’s Office has been a part of the project since 2007.

Sheriff Bryan Hutcheson said he does not agree that 287g leads to racial profiling.

“We do not participate in profiling in any way,” Hutcheson said. “Folks come into our jail having been arrested for something else. They’re not arrested upon being questioned about where they were born; they were only arrested for breaking another law.”

According to former Rockingham County Sheriff Don Farley, between August 2007 and October 2011, 1,458 foreign nationals were arrested, 514 of those were placed on detainers and approximately 260 were deported.