Rolling Out the Un-Welcome Mat for Cantor in Philly 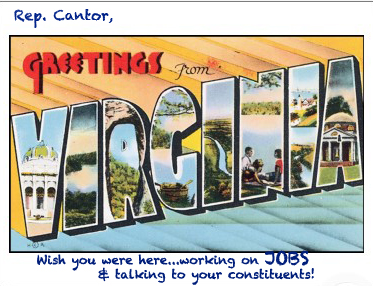 Rep. Eric Cantor will receive a not-so-warm welcome by hundreds of protesters at his appearance at the Wharton School of Business in Philadelphia today. Rep. Cantor will be giving an address today at 4:00pm on income inequality, something that protesters say, his policies perpetuate.

Virginia Organizing Leader Dee Jacobson will be making the trip from Locust Grove, Orange County to address the rally.

"I shouldn't have to travel 250 miles just to see my Congressman. Instead of facing his constituents to explain why he is not fighting for jobs, he is here in Philadelphia speaking on the virtues of trickle down economics. Well, in Virginia we are tired of waiting for things to trickle down and we are tired of waiting for Rep. Cantor to show his face in his district."

The protest is organized by Keystone Progress, Occupy Philadelphia, Philadelphia AFL-CIO, Fight for Philly, Progress Now, AFSCME and will also include a group of Rep. Cantor's constituents who made the five hour trip to see their Congressman. This gathering will be a demonstration by hundreds of people who are dissatisfied with the way many in Rep. Cantor continues to pander to the wealthy – despite growing income inequality.

Constituents of Rep. Cantor's who could not make the drive to Philadelphia have been expressing their support and solidarity with the protesters and have balked at the idea that their Congressman would be addressing income inequality.

"Rep. Cantor is inaccessible to his constituents and is not facing the jobs crisis in his own district. As a grad student, my husband is the primary breadwinner and all he can find are short-term contract jobs. Every six months we don't know how we are going to pay the bills. Is this the kind of 'income inequality' that Rep. Cantor plans on addressing in Philadelphia?" said McKenna Stevens of Henrico, VA.

"I'm thrilled that Philadelphia is rolling out the unwelcome mat for my Congressman of ten years. The only job that Rep. Cantor has ever cared about is his next big job. He constantly puts himself and his party above his country and his district," said Ray Scher, RN of Ruther Glenn, VA.